From The Hill... Flows The River 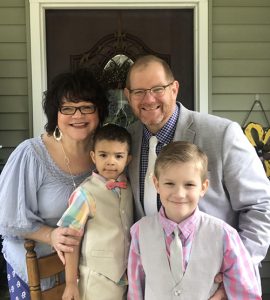 Pastor Patrick Neyman & his wife Petrice came to FGCC in 2005.

He completed his studies from Global University/Berean School of the Bible and received his credentials through the Assemblies of God. He was born and raised in Buffalo, NY. In his early teen years his family attended a small church (Newtown AG) on the Cattaraugus Indian Reservation, south of Buffalo.

As Pastor Neyman tells it : “My dad thought he was going to hear a preacher, but little did he know I would meet my future wife there!” Petrice (Beck), an enrolled Seneca Indian, attended Newtown AG with her family (Philip & Karen Beck). The two dated and married in May 1992. In their early adult years they walked their own path without God. But on Nov.26, 1996 God got the attention of both of them and they rededicated their lives to Christ and they have never looked back. They had a call on their lives to minister; and through much prayer and seeking, they knew that “The Spirit of the Lord was upon them to “Preach & Sing freedom to the captives” (Isa. 61:1)

God began to open doors and the Neyman’s became missionaries to Freedom Village USA in Lakemont, NY, a home for troubled teenagers. While there, they had the opportunity to vacation in Baton Rouge, LA and attended Camp Meeting services @ Jimmy Swaggart Ministries, where they both received the Baptism in the Holy Spirit.

They returned and continued to work at Freedom Village for a short time. The Lord moved them on where Pastor Patrick assisted Rev. James Morrison at Silver Creek AG, and both Pastor Patrick & Petrice were youth leaders. From there they were asked to temporarily fill in at Newtown AG until a new pastor was found. While there, the congregation asked the Neymans to stay on as pastors and they accepted. It was here the Lord had brought them full circle to the place where they met as teens. They pastored there for over three years.(“One of the greatest things we ever did”).

From there the Lord moved them to the Southern Tier of NY. On Nov. 1, 2011 their son Patrick II was born and on Sept. 17, 2016 their second son Peyton was born. They both are wonderful additions to their family. “We believe they were born to be “singing preachers”.

Today they have a vision to see FGCC “lifting Jesus Higher”.

It is their prayer for Full Gospel Church Catlin to be: PEOPLE, Empowered by the Holy Spirit, Working Together, Spreading the Message of the Cross!